Last weekend we were able to go out and pick up our pumpkins. We look forward to the years we can afford to do this extra outing. Last year we didn’t do the outing, but we did get pumpkins from Walmart to carve. This year we did the whole trip right down to donuts, and cider. Dennise had the camera most of the time so what I have is what we have. I did take over to get a picture of the girls though. Hope you enjoy.

Deanna is so excited we are at the pumpkin farm.

Lilly sitting pretty on the pumpkins.

It was a bit cold out and she was more interested in the shadows on the ground then looking up at Grandma.

Lilly found her pumpkin. I told Samantha she could pick out a bigger one, but she said she wanted her to have one she could carry.

Samantha giving the girls a ride while Papa is taking forever to pick out his pumpkin.

Two carts one for the girls and one for the pumpkins. I think in this picture Deanna is picking out her pumpkin.

Deanna gettin hot so the coat is coming off.

Here are my girls.

Here are my girls making their pumpkin faces.

Dennis and looking through the gourds.

Dennise taking pictures of the gourds.

Time to pick out the Honey. Need to make another trip back and get some more.

Lilly and Samantha waiting for me to pay for everything.

Here we are all ready to leave with our pumpkins to carve which comes next week. I hope you enjoyed this post and will stop back next week for the carving pumpkins with Marksville.

Do you carve, paint, or decorate pumpkins for Halloween?
Posted by MarksvilleandMe at 8:47 PM 3 comments:

It has been a while so thought I would share something we have made with all of our children, which would be about 20 years or so from when my son was old enough to play with it without putting it in his mouth.

We found the original recipe on something I got free from a Tide promotion, if anyone remembers this promotion let me know so I can give the credit to them, my husband just informed me that he still has the activities from this copied onto his computer. A few years later we found another recipe in a book called "The Ultimate Book of Kid Concoctions" by John E Thomas and Danita Pagel Thomas, which we had orginally bought from QVC but can be found online by searching for the above book on your favorite search engine.

We also have "The Ultimate Book of Kid Concoctions 2" by John E Thomas and Danita Pagel Thomas if you are interested in two great books to provide years of fun for your children, grand children, their friends, and I can't lie but also for the Grown ups who still like to have fun, then these might be something you would like to look into.

My 11 year old daughter Deanna really wanted to make some and even though I wanted to hold off until this weekend so that we could do it while my oldest grand daughter Lilly is here but we compromised to make slime today and other concoction on Saturday so check back later in the week to early next week for another post.

OK so on to the recipe we used this time. 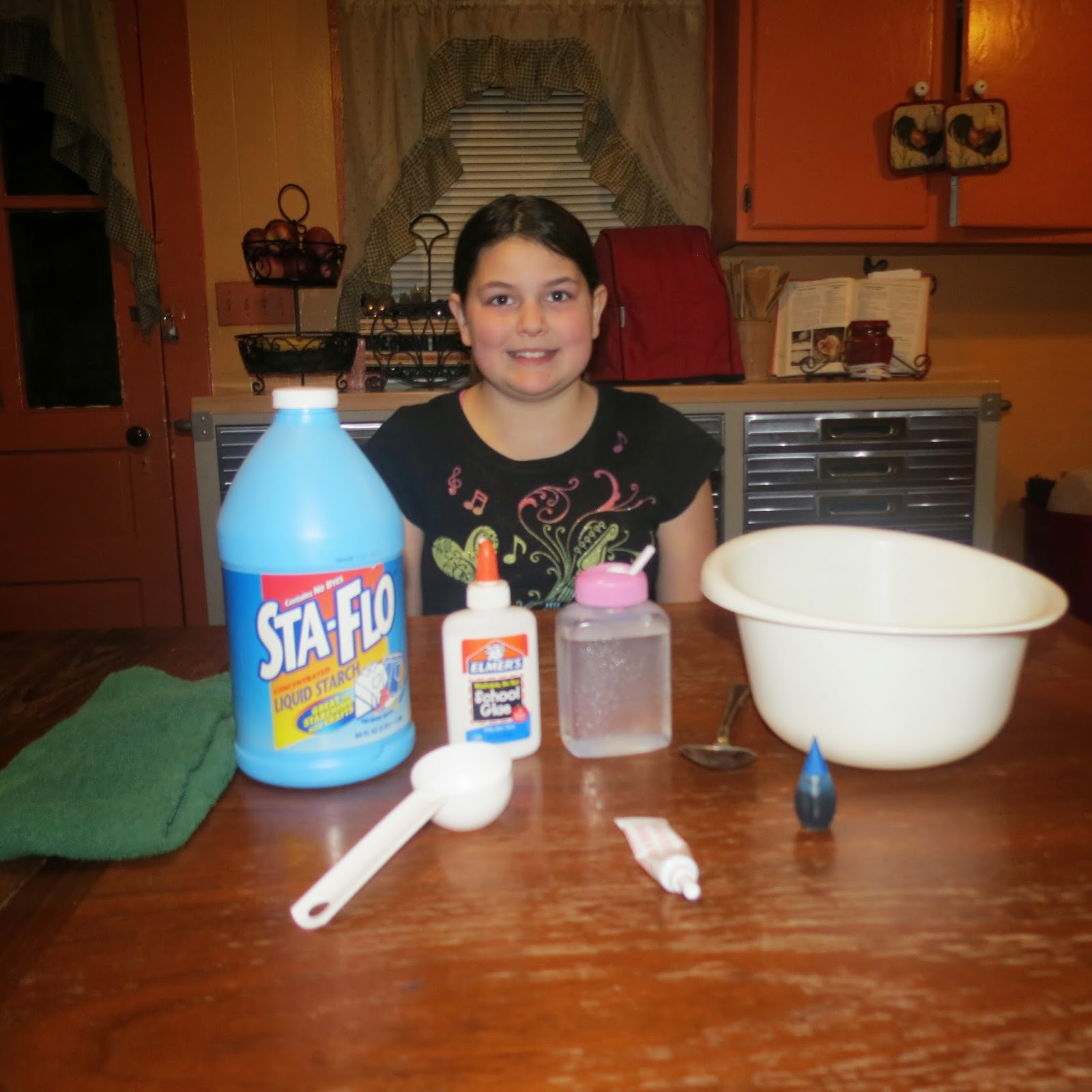 You will need a bowl, spoon, 1/4 measuring cup, Elmers Glue (although you could use any white school glue),  Liquid Starch (we buy Sta-Flow because it is the only brand I know of, but if you have another liquid starch available I am sure that would work just fine too), and some tap water. Food Coloring if you want to make different colors. 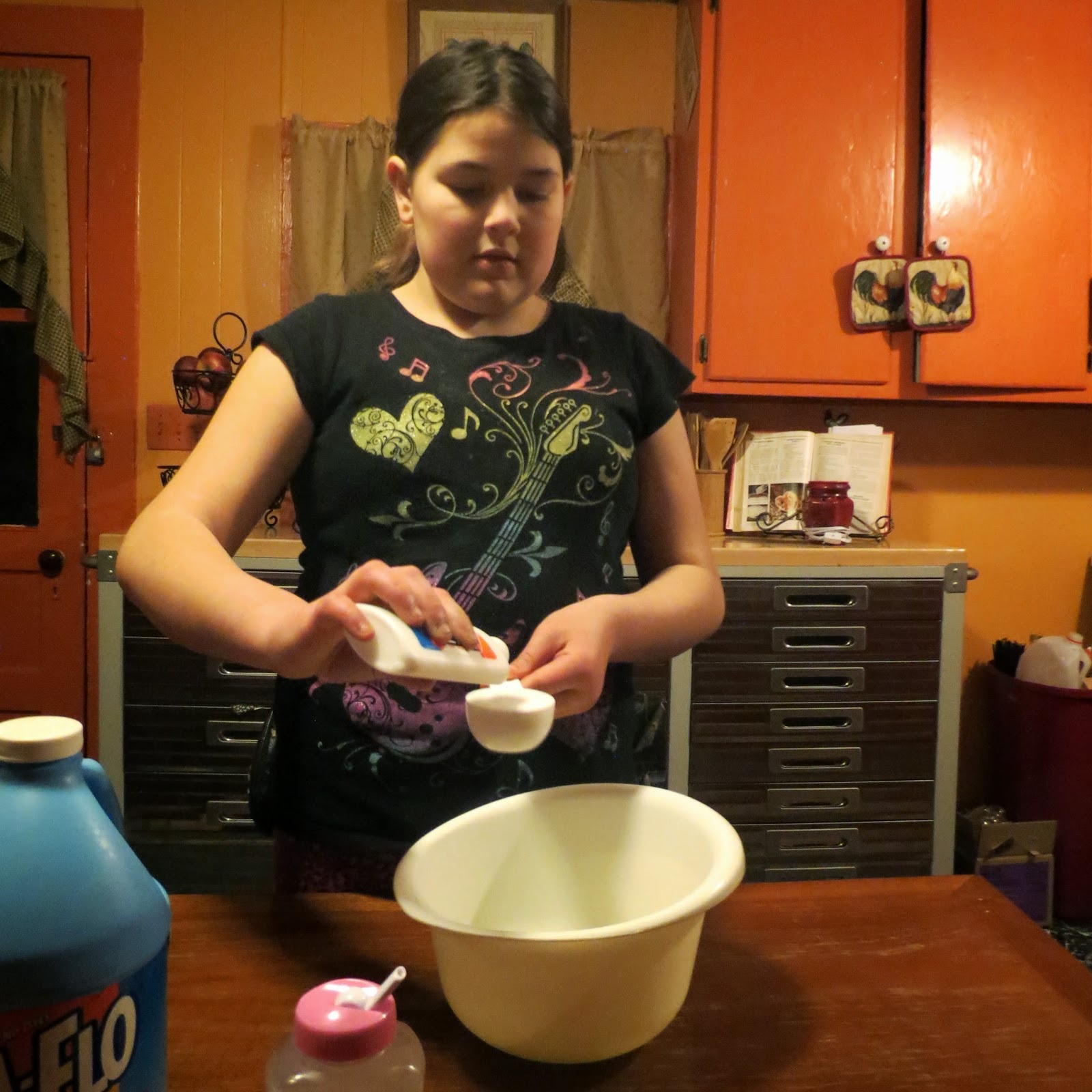 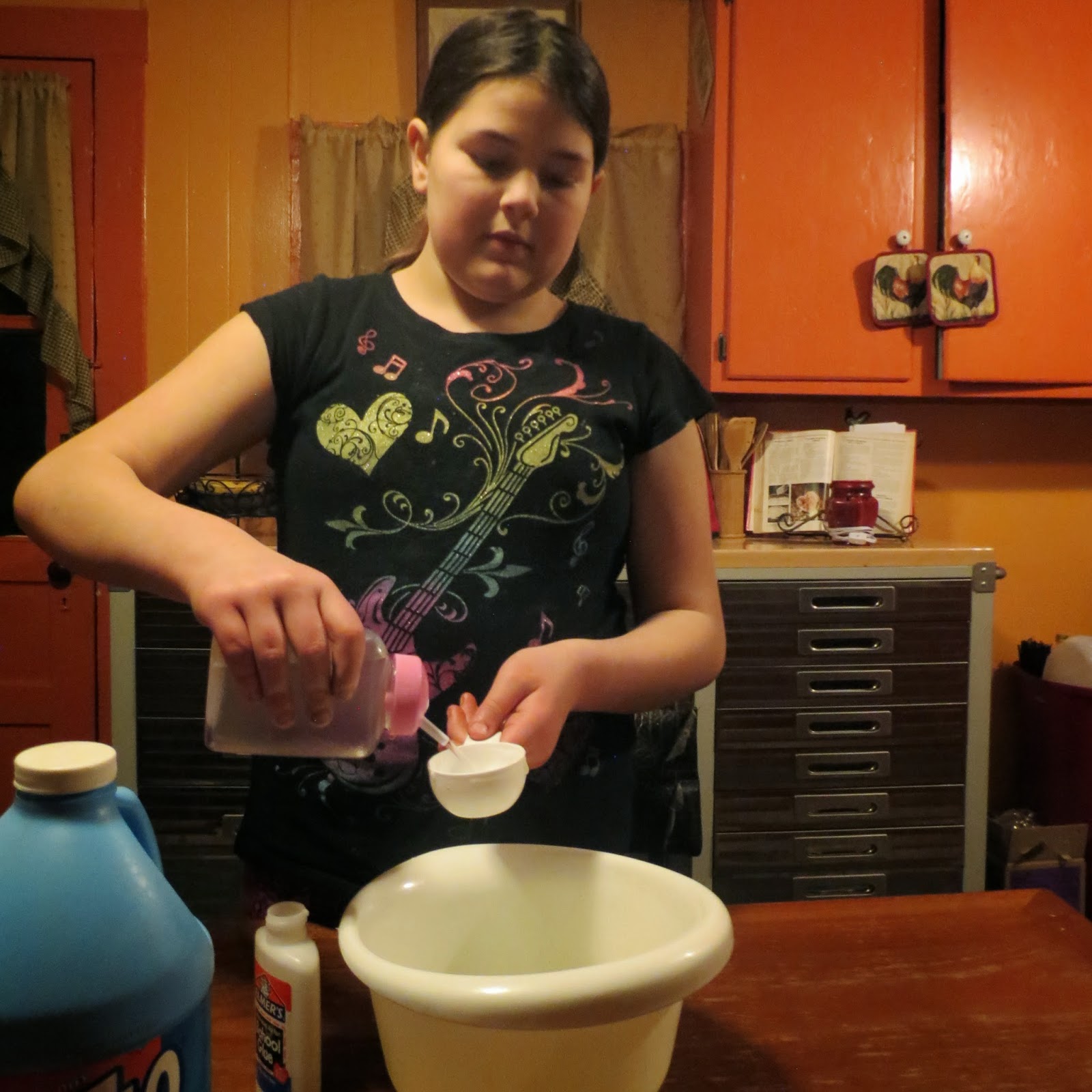 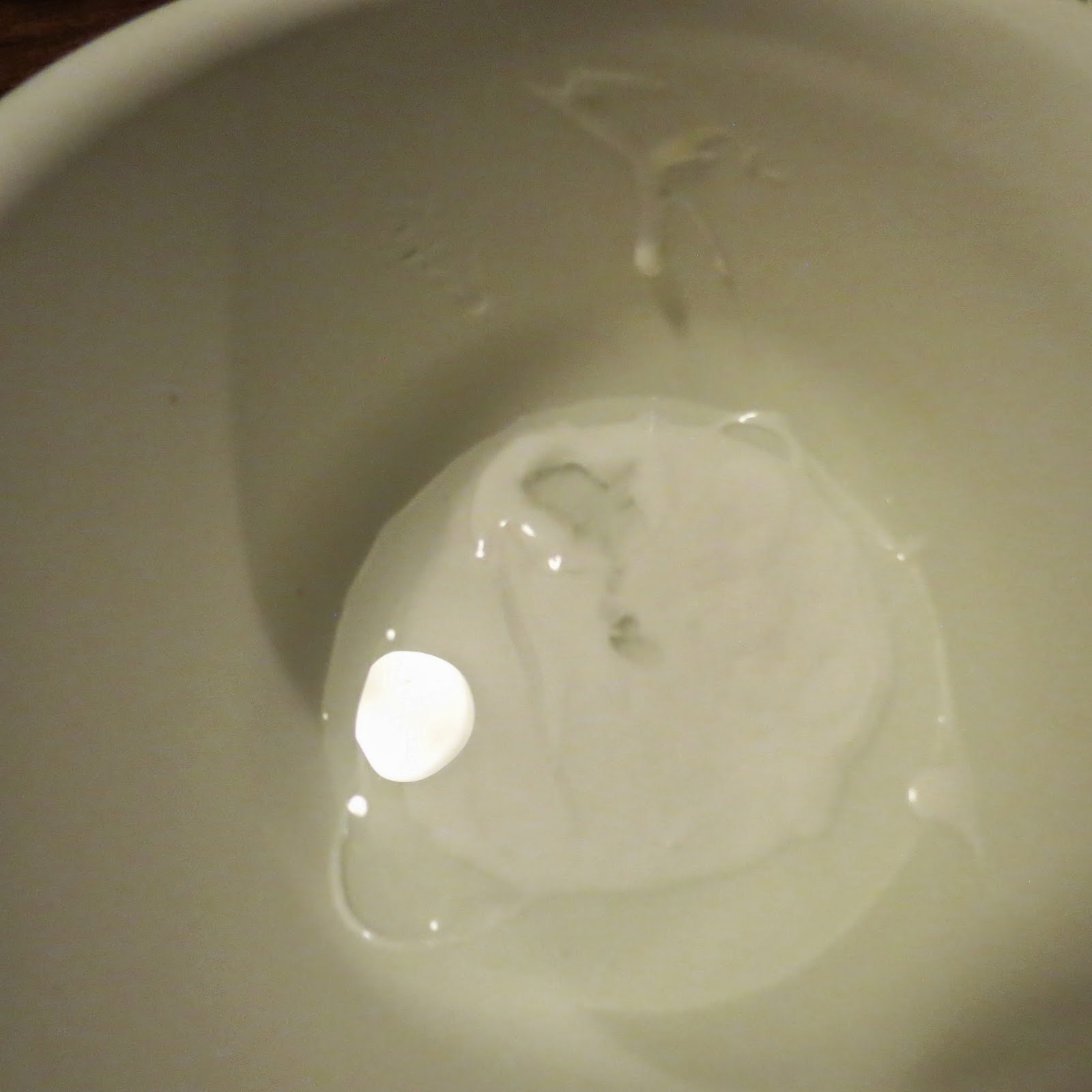 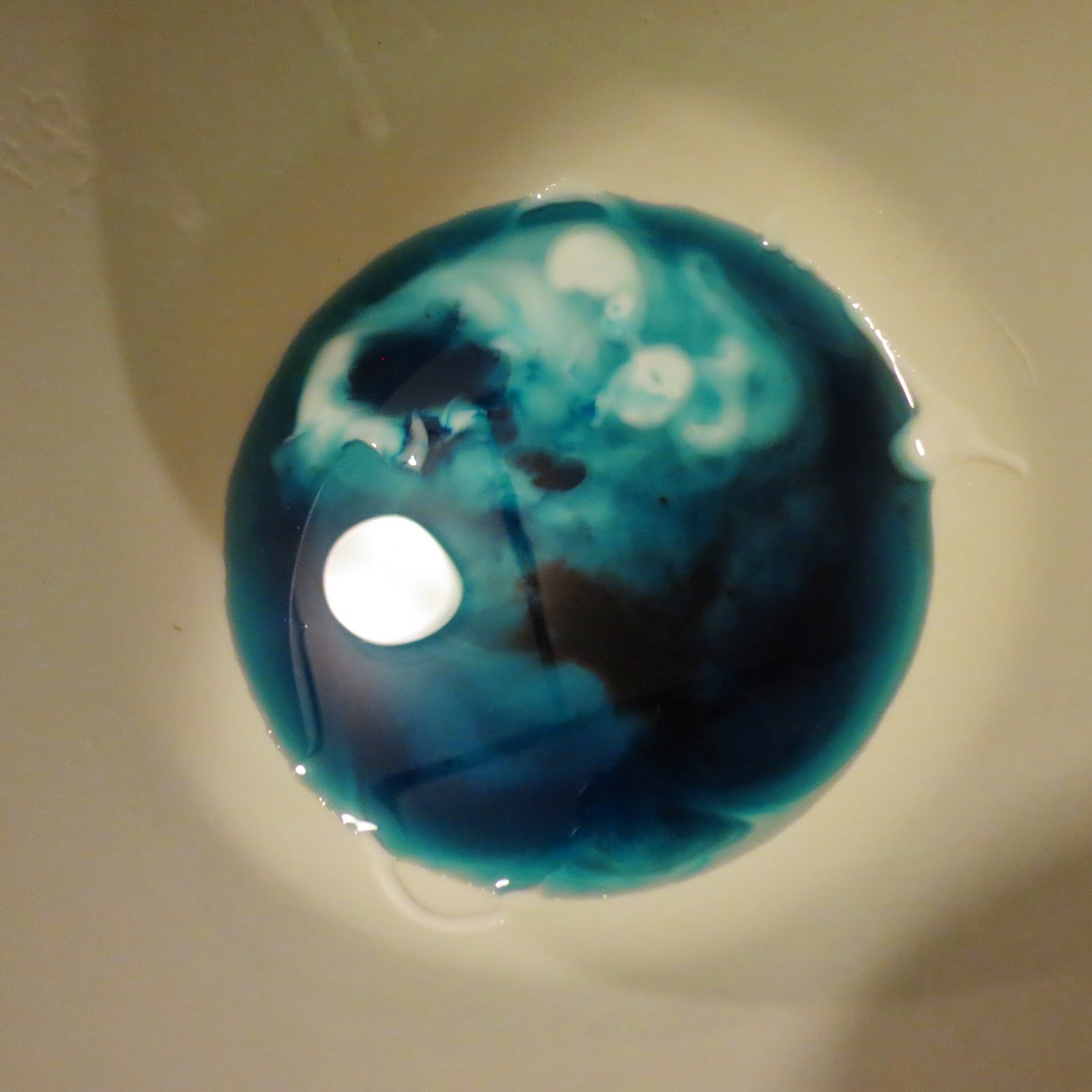 Now add your food coloring if using. To make lavender we used 2 drops of red and 3 drops of blue.
Then Stir until combined. 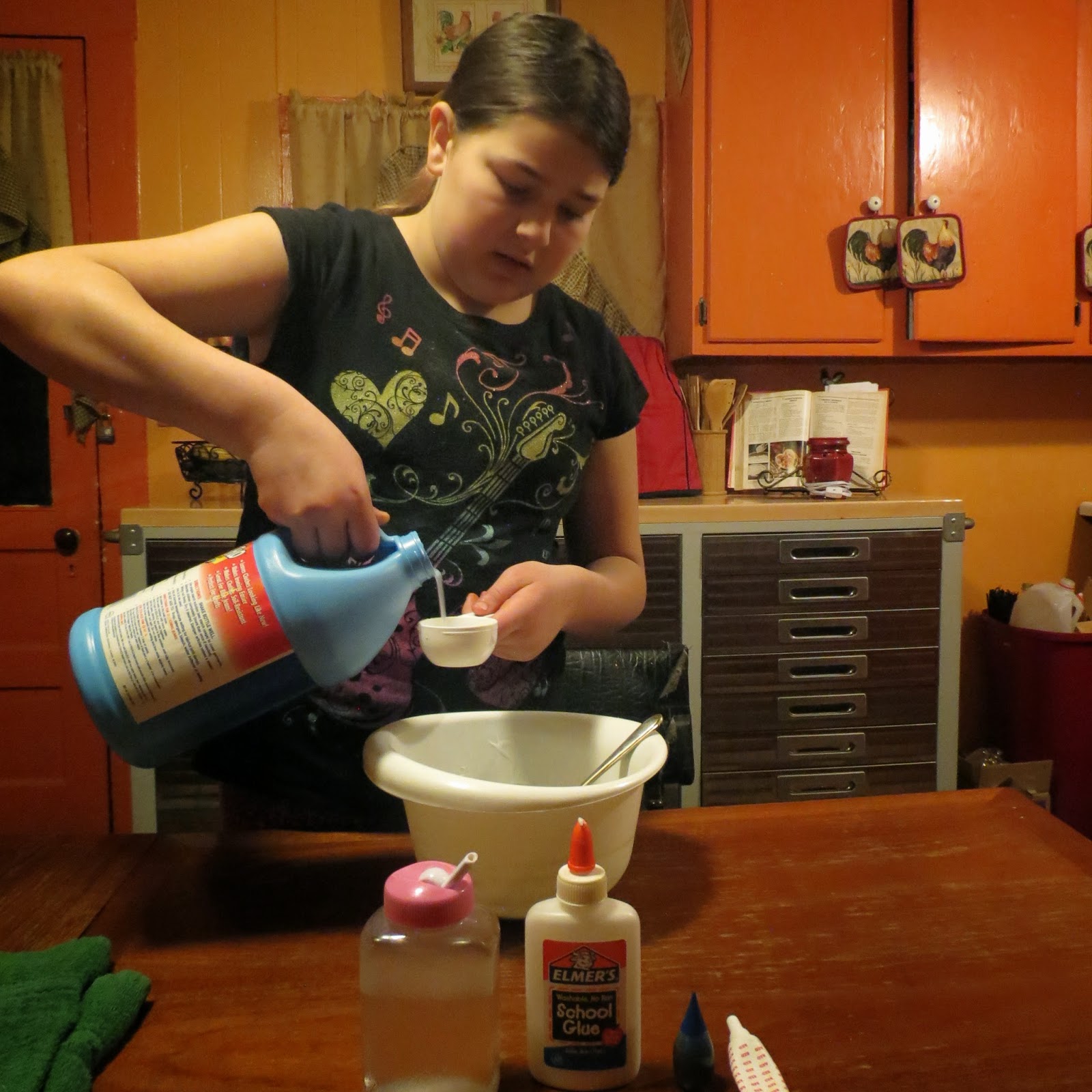 Next add 1/4 cup of the Liquid Starch. 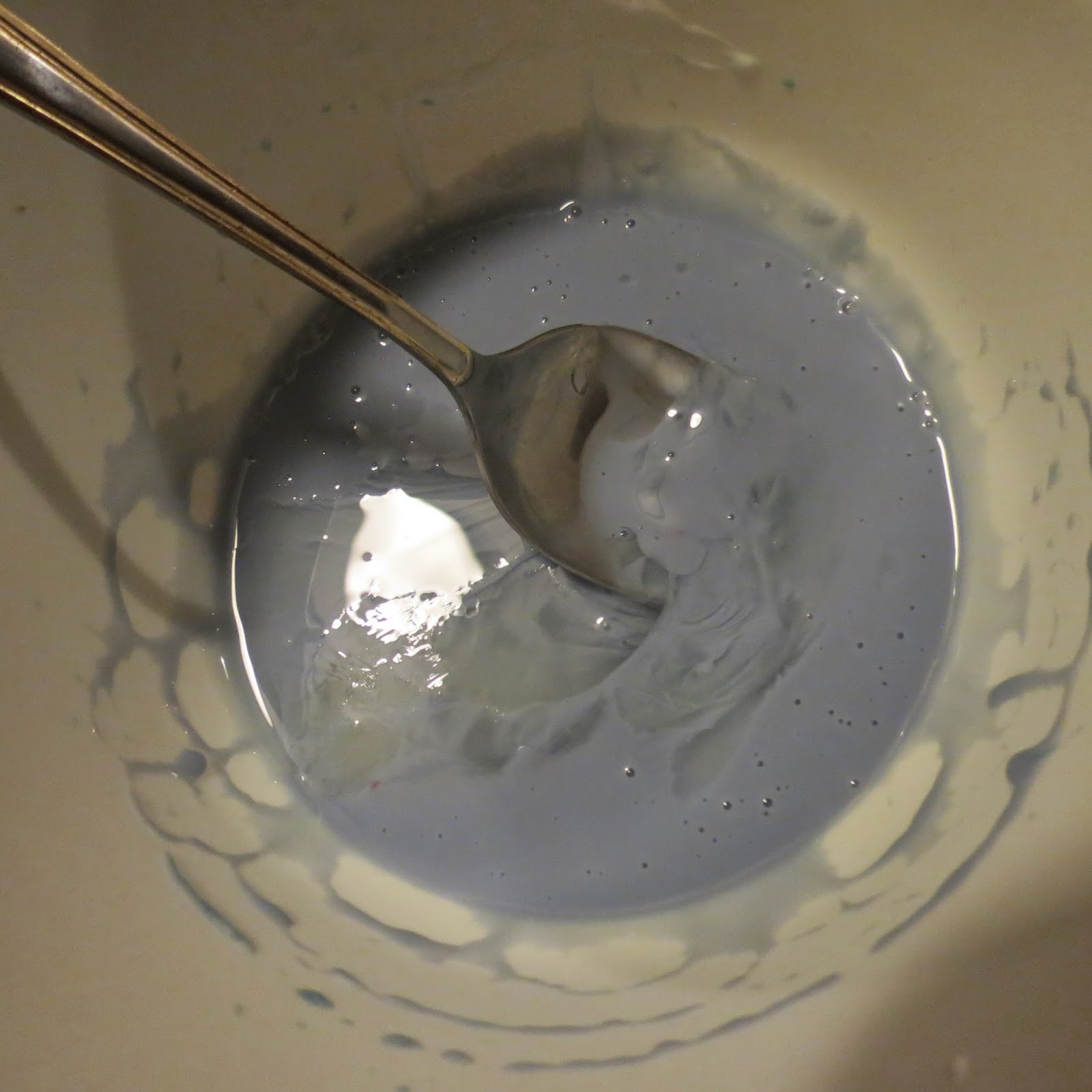 It should look like this before stirring. Now stir and stir until you get the below consistency. 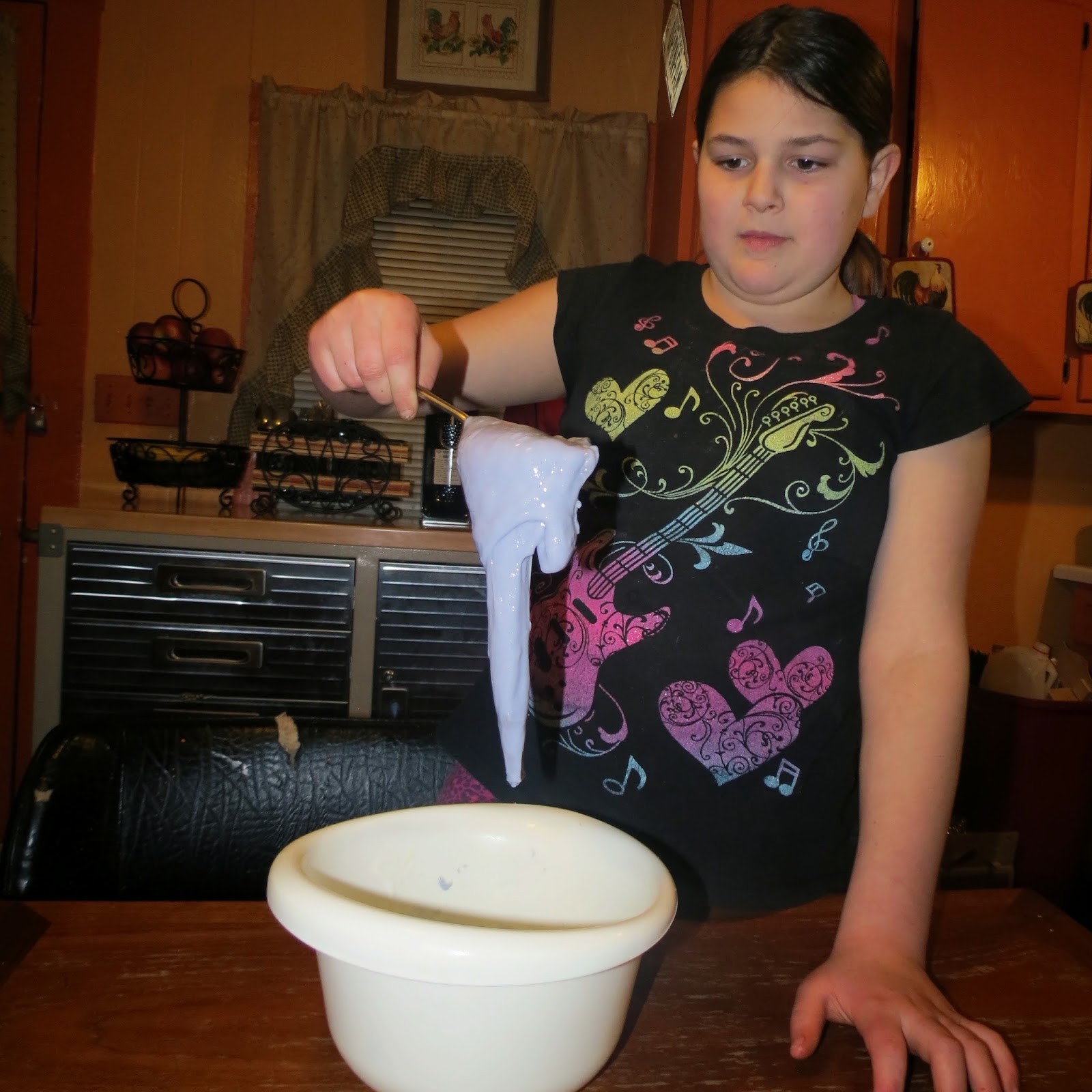 This is what it looks like hanging from a serving spoon. 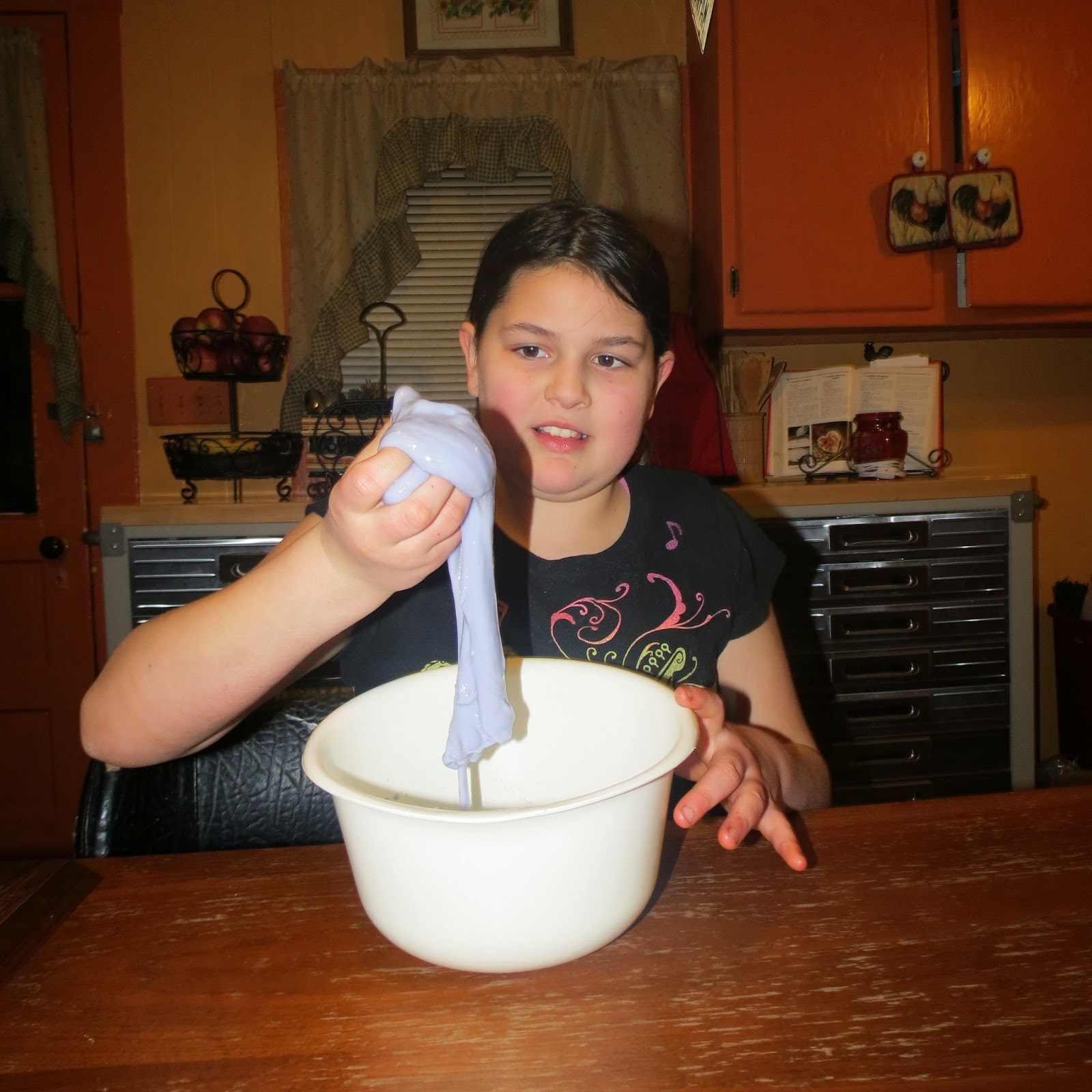 This is the face Deanna makes she first touches it.

You can double, triple, and quadruple this batch until you have the amount you need for your little ones.

I suggest that when not in use that you store it in a plastic covered container or a plastic zip bag.

I hope you enjoyed making Slime with MarksvilleandMe and will visit again soon to see what our family does for fun.

More about the products MarksvilleandMe used can be found at the sites below :
Sta Flo
Elmer School Glue

Posted by MarksvilleandMe at 11:41 AM No comments:

As most of you know my husband cooked and baked for us over the weekend which you can see in my prior posts, so that was his Valentines Day present to us this year. We didn't have much money so we had to make due with what we had in the house. I do have a few pictures to share though so I hope you enjoy.
Deanna had a project for school which she turned in last Monday. It was to make a valentines day box for her Valentines. Hey if it is a craft our family is on it. Deanna did this one except for me cutting the heart out all on her own. She sure has her fathers and my creative flare. Hope you like it, I think it came out beautiful. She made this from a Corn flake box, wrapping paper, glue, tape, construction paper,and valentines day flyers.

Deanna with the finnished heart.

I just love it sure screams Princess to me.

I also ordered a card for my husband of course for free, so love the freebies. I see that he opened it this morning and would love to share the note he left me but it is personal, so lets just leave it at that.

My mother-in-law God bless her heart bought us a huge Valentines day Heart filled with chocolates, and a little pink fluffy doggie for Lilly which isn't shown as we already gave it to her she loves it. Will see if I can get a picture of her with it to add at a later time here.

I put a all you magazine on it so you would see how big it is.

I know the kids will be enjoying their chocolates tonight. They didn't have them over the weekend as we had planned because Dennis had made those delicious molten lava cakes. Me I am looking forward to the clearance candy after the Holiday. I sure hope you had a wonderful Valentines day. I know Marksville sends love out to each and everyone of my family, and friends for a day filled with love, hugs, and kisses. Happy Valentines day!
Did you give or get anything special for Valentines Day this year?

Posted by MarksvilleandMe at 9:41 AM No comments:

got ready for Pumpkin Carving on Sunday Night.

Dennise noticed these really festive pages in the Sunday paper so she took them all out and laid them on top of the papers she already put down. What a great idea.

In some of the pictures you will notice a half white and half orange wall, the white wall was where the tiles use to be that kept falling apart so Dennis took them down and is working on getting the wall ready for new paint.

The pumpkins are all set up and the kids are starting to Rally around the table.

Dorothy cleaning out pumpkin #1, which she got from the field trip she went on with her classroom.

Love the looks on their faces while they are cleaning them out.

This is her finnished product.

Up to her elbows in this one.

She said she wanted a bat so Daddy helped her out.

Deanna and Dennise working on their pumpkins.

Deanna's finnished pumpkin, with the heart eyes, and fangs.

Paul helping to draw the fire on Samantha's Pumpkin. Will make sure there is a Pumpkin for Paul next year.

Samantha totally didn't like cleaning the pumpkins out but Lilly was sure enjoying herself. She was even laughing.

Lilly's pumpkin which I think looks like Jack the Pumpkin King from Nightmare before Chistmas.

Dennise was having a rough time deciding on what she wanted to make. She just wasn't happy.

Then she got an idea.

Which turned into this, which I think is awesome.

Dennis was working so hard helping others with their tops, that he didn't get to his until today.

it was worth it to see his Goblin.

Last but not least is mine.

I think it is kind of cute, and everyone loved my eyes.

I kept making all of these funny faces while making this, and the kids kept laughing.

I hope you all enjoyed Pumpkin Carving with Marksville. Below is a picture of everyone's except for my husband's which I will add when we light them tomorrow night, as his was not ready when we did the first Pumpkin line up. Next year I would love if Buke and Taylor could join in so we have the whole family together.

Happy Halloween from Marksville to all of my friends and family.

Remember me saying all I was missing was Buke and Taylor? Well...

Here is Buke and Taylor with their pumpkins and furbabies.
There is my Gorgo on their lap and if you look in the window you will see my Sable they are my two grand- furbabies.